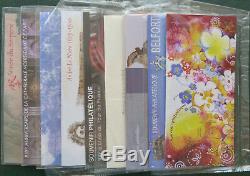 The price for the full year of 14 blocks philatelic souvenir with blister card issued in 2013 is: 123.00. These 14 blocks philatelic souvenir were opened for control condition, delivered in blister pack with its original card. For payment by check please Less: 4.00. Many other items are available as well as single or full year. The item \The seller is \This item can be shipped to the following countries: France.