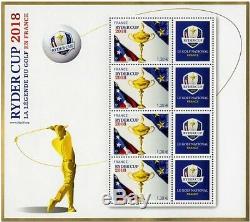 Sheet Ryder Cup 2018 golf legend in France. From 25 to 30 September 2018, the Ryder Cup, the world's greatest golf courses, stopped for the first time ever in France, the national golf in saint-Quentin-en-yvelines.

Created in 1927, this race legend opposes every 2 years, the 12 best European golfers the 12 best American golfers. It is held alternately in the two continents. Defending champions, the Americans will be keen to defend a trophy won in 2016 but since 1985 has mostly been raised by European. With 250,000 spectators, a broadcast in 185 territories and 375 million affected households, the shock Londe Europe / United States will be global. The item \The seller is \This item can be shipped to the following countries: France.