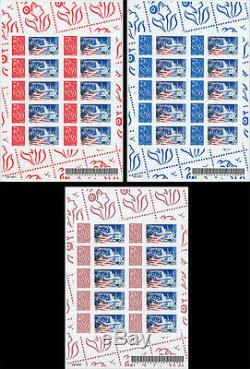 10 personalized stamps values ​​(tpp) Priority letter red 20g - 10 personalized stamps values ​​(tpp) 0.60 Blue - 10 personalized stamps values ​​(tpp) 0.86 adhesives rose in nine limited edition 600 copies very rare. >> see all objects of the category \>> see all objects of the category \In this year of the 80th anniversary of the crossing of latlantique by Charles Lindbergh, lairbus a380 senvole to conquer the United States: 19.03.2007: two A380 flew today for the first time to the United States, to the east coast and west coast respectively. Lavion development msn-007 with 500 passengers on board, took off from Frankfurt (Germany) to land on the international airport john f. Kennedy (JFK) in New York (USA), in the framework dune series of exercises Commercial Route Proving done in collaboration with the company deutsche lufthansa.

The unit will join March 20 airport chicago ohare (USA) and will return to JFK (USA) on the same day, before returning to Frankfurt (Germany) on 21 March and its further proving Road to Hong Kong (China) and again the USA. Meanwhile, LA380 Dessai msn-001 left from Toulouse (France), landed on the international airport of Los Angeles LAX (USA) in the dune part of essays of airport compatibility series taking place locally in collaboration with qantas airways Australian airline which will carry out the first regular service sydney (Australia) - los angeles (USA) with LA380. 80 years ago, the American aviator Charles Lindbergh, 25, managed to cross the Atlantic solo and nonstop. Party May 20th, 1927 at 7am.

57 am roosevelt field near New York aboard the monoplane \After a flight of 5810 km and 33 hours 27 minutes the spirit of St. Louis landed at the airport Bourget, near Paris, May 21, in an indescribable enthusiasm. The hero is torn from his cockpit while the memories of fans begin to tear his plane's stabilizer. Despite the great advances that have occurred aviation since the time of this feat, performance and Lindbergh courage are always greatly admired.

The many failed attempts of this crossing before Lindbergh (including bird and white nungesser coli) show how this performance was beautiful. His name now appears in the aviation history alongside and merciful Nader louis blériot. Five custom stamps (tpp), four vignettes us, several special seals and numerous folds aérophilatéliques commemorate this double event of the first American stops of the super-jumbo European and the anniversary of the feat of Lindbergh. Checks accepted for accounts domiciled in France.

/ Checks accepted for accounts domiciled in France. The item \The seller is \This article can be shipped worldwide.